Stanton Williams’ €48.8 million transformation and extension of the Musée d'arts de Nantes opened to the public on Friday, 23 June 2017


The Musée d'arts de Nantes opened to the public on 23 June after a major transformation by British-based architecture practice Stanton Williams. Following an inauguration ceremony led by the Mayor of Nantes and France’s Minister of Culture, the museum will once again become an integral element of Nantes’ civic fabric. For this landmark cultural project, Stanton Williams has updated the historical site – an exemplary expression of the city’s civic and cultural pride and one of the largest Fine Arts Museums in France outside Paris - adding a contemporary layer to an exceptional accumulation of historical monuments. 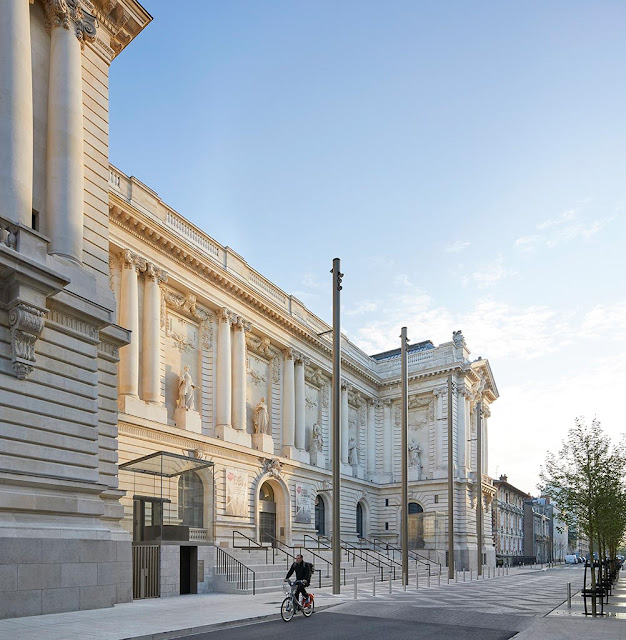 This new design blends a finely tailored museography around the collection with contemporary architecture - transforming the introverted image of the former Musée des Beaux-Arts into a vibrant, democratic and welcoming contemporary space that is open to the city and its people and visitors. The Musée d’arts de Nantes incorporates several key extension buildings to the original 19th Century ‘Palais’ and 17th Century Oratory Chapel, where a multi-channel video installation by artist Bill Viola has been rehoused. The addition of 4,000 sqm space will allow the Musée to exhibit its growing contemporary collection of artworks. 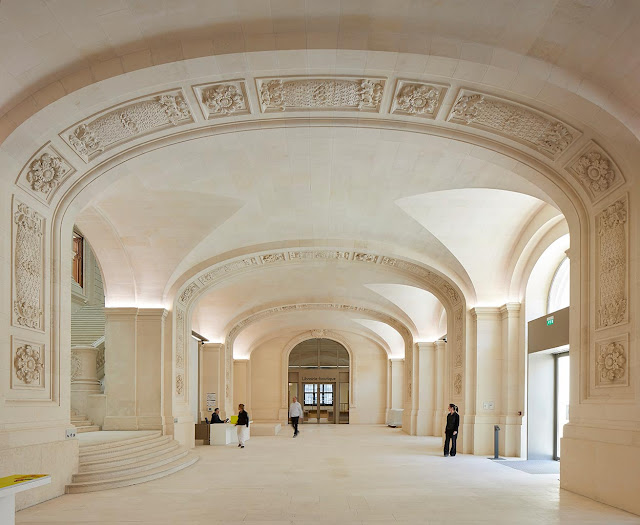 An auditorium, library, new educational facilities, archive, and external sculpture court have also been created.  A fully integrated landscape design will lead the way to the museum from the surrounding Place de Oratoire and Botanical Gardens, creating new access routes and enhancing the museum’s renewed central role in the urban fabric of the area. 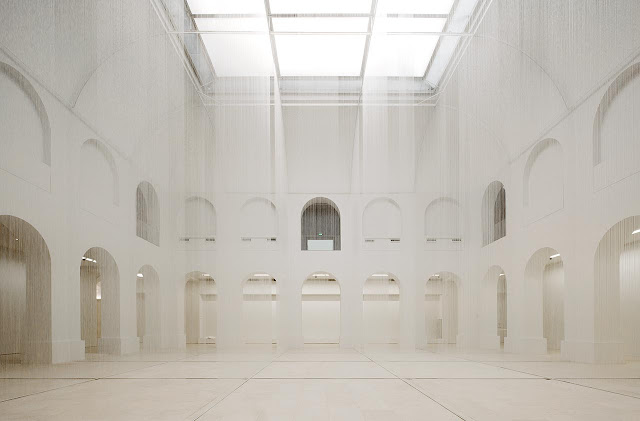 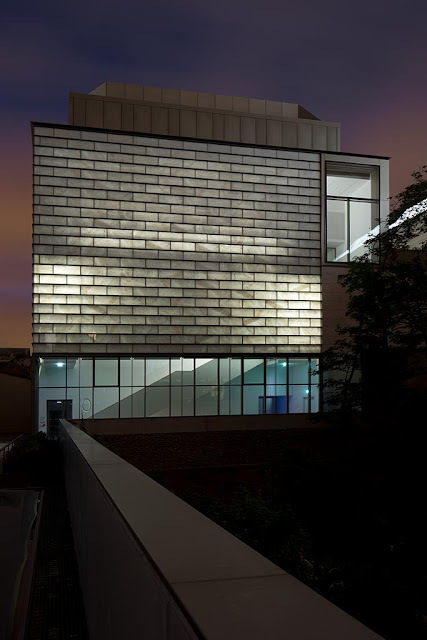 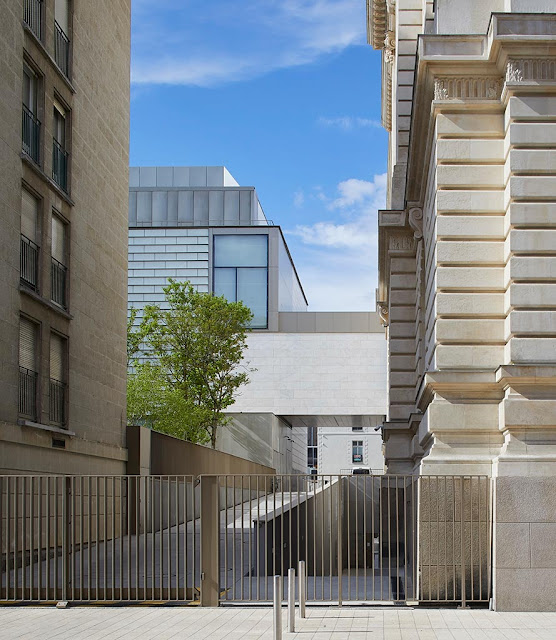 The new ‘Cube’ extension is connected to the Palais by a spacious gallery spanning the Cours Dupré. It boasts contemporary galleries on four floors, which are linked by wide gaps that allow natural light to enter the building and connect the galleries in visual terms. Openings to the outside present the cityscape as another artwork – offering a reversed extension of space; it carries the imprints of the pedestrians, cyclists, and cars, as they journey around. 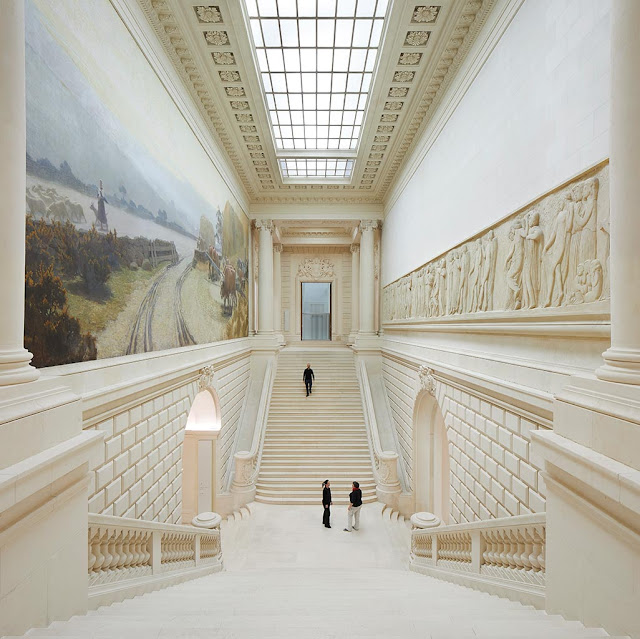 The staircase on the south side of the extension consists of a suspended curtain wall made of marble and translucent laminated glass. It provides a counterpoint to the existing monumental staircase in the Palais and references the time when alabaster and marble were used in order to draw natural light into Medieval churches whilst protecting precious artworks within. 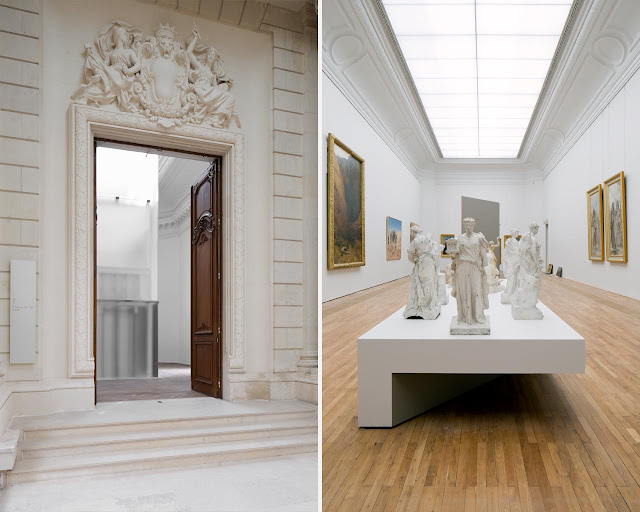 The bridges and landings behind the facade are new public routes that allow visitors to navigate the complex trajectory of the collections, spanning from ancient art to contemporary with unique art installations. 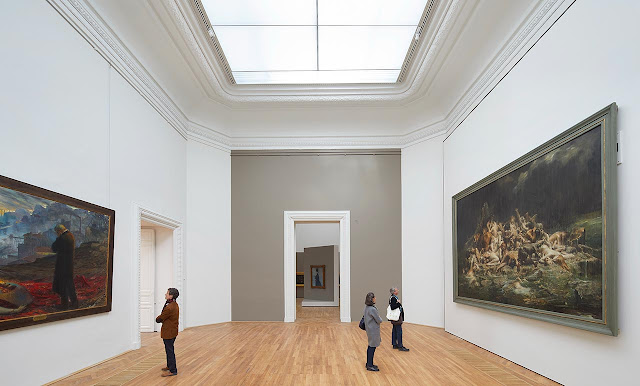 "These are not only additional square metres, but a distinct cultural action. With this Musée d’Art we are inventing something that has not been done before. Experiment, dare, propose. To make it live!" 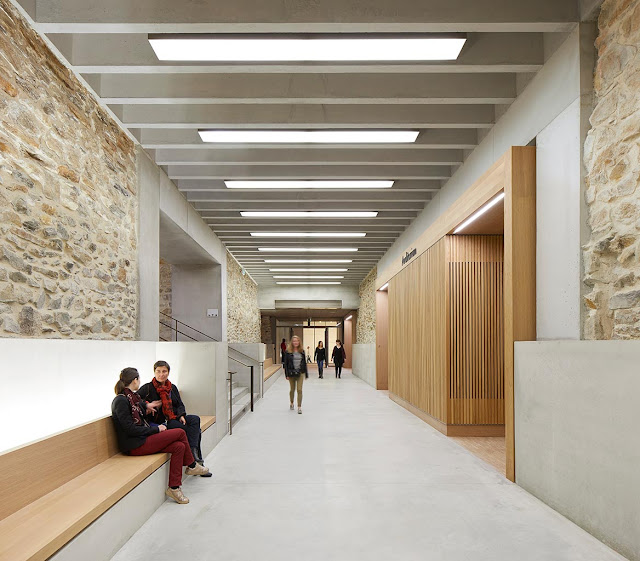 In keeping with the grand Beaux-Arts architecture of the Musée, a consistent palette of materials has been applied through the renovated spaces. This creates the impression that the museum is one monolithic volume - carved out of a single block of stone. In the museum’s existing Patio area, a site-specific installation comprising 350km of translucent silicone threads by Susanna Fritscher, frames the remarkable architecture of the newly renovated space whilst bathing in its natural light. The natural light of the nearby Atlantic is integral to the redesign, and the new museum experience. The existing glass roof that used to light the galleries has been replaced by complex superimposed layers of glass, innovative stretched fabrics and modular stores. The result is a ‘passing clouds’ effect that retains and optimises natural light and emphasises the new focus on openness and connects the visitors with their environment. 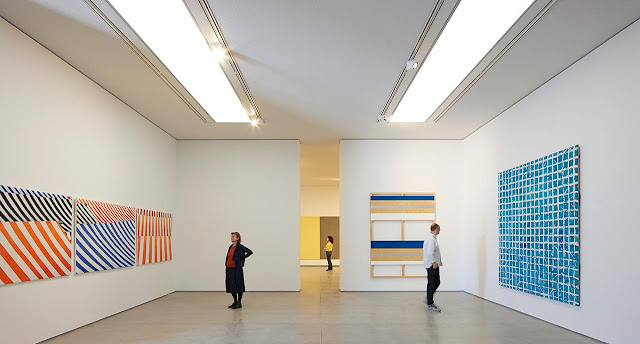 In response to an all-encompassing brief, Stanton Williams has collaborated with Cartlidge Levene to redesign and develop Musée d’arts de Nantes’ overall visual identity. This includes bespoke design of the lobby, café, museum shop, cloakroom and reception, and the overall formulation of a clear visual identity, which unites the museum’s exterior and interior, and creates a holistic and meditative museum experience that will have a lasting impression on visitors. 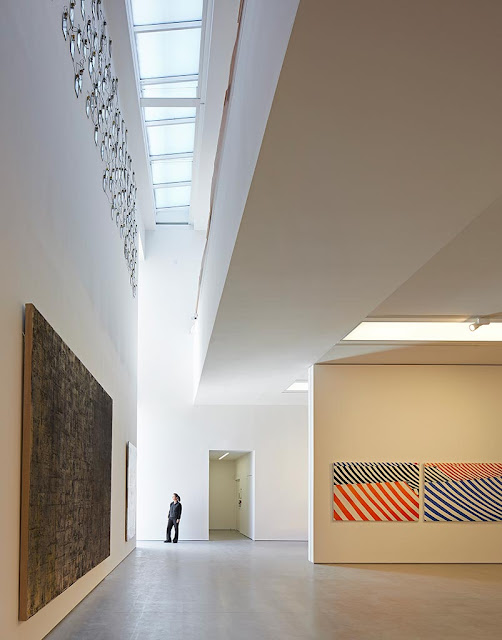 Patrick Richard, Director at Stanton Williams, leading this project, says: “We are grateful to the city of Nantes for entrusting us to transform and extend the City's Museum of Art, as well as designing the exhibition spaces for their exceptional and valuable art collections, providing flexible galleries for temporary art installations. We have also had the unique opportunity to transform the main street leading to the museum and, alongside graphic designers Cartlidge Levene, create the graphic identity and signage for the Museum. The new Museum has been conceived around the existing collections; creating an intimate dialogue between art and architecture that firmly embeds the new Museum within the distinctive historical setting of the city.” 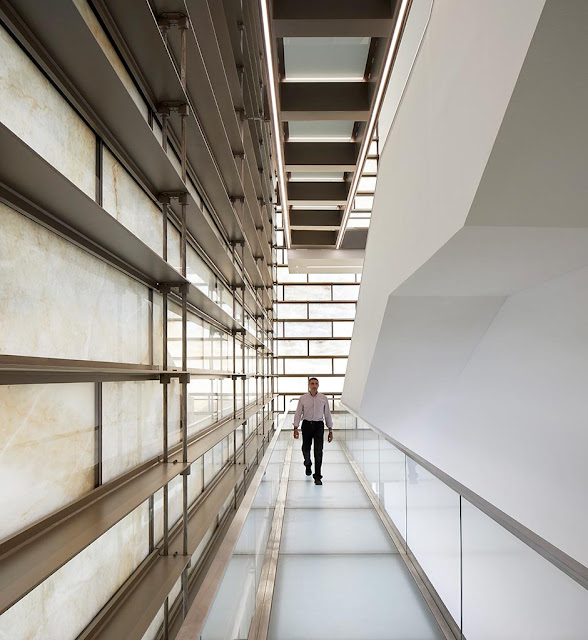 As part of the inaugural exhibition programme at the new Musée d’arts de Nantes, Stanton Williams has curated an exhibition that details the processes involved in the making of a significant public museum. Located in the Salle Blanche, L'épopée d'un Projet 2009-2017 will run for six months from the official opening. The exhibition allows visitors to immerse themselves in the project by covering the entire eight year period of planning and construction through the display of development models from the competition stage, to information about the methodologies and museography involved.  The exhibition will also include previously unseen photographs of the construction process, which reveal the complex aspects of the transformation.


"Stanton Williams, won the competition for the renovation and expansion of the Musée des beaux-arts in Nantes because of the high quality of their architectural design, working with great professionalism and availability with the entire team museum. All aspects of the project were studied, analysed and finalised with great professionalism taking into account the many constraints and consultants. Stanton Williams’ knowledge of working within the constraints of the museum and their respect of the existing building make this project a key element of the cultural policy of the city of Nantes."

Two films feature in the exhibition; the first documents the entire design process behind the new museum and includes sketches, drawings and model making; the second film, by producer and artist Ben Cullen Williams, uses the method of  time-lapse film to capture the journey of light as it travels through the museum. 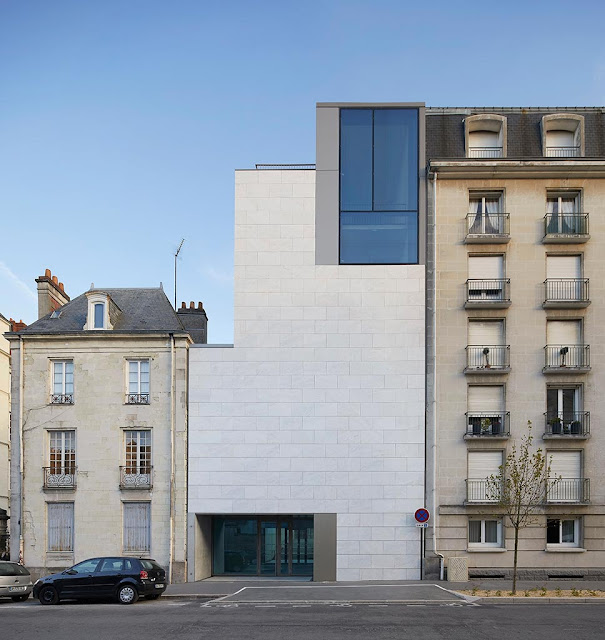 On the occasion of the opening, French publishers Archibooks launched a dedicated monograph on Stanton Williams’ transformation as part of their new series: L'esprit du Lieu. The book introduces the many facets of the building for the first time. In extensive texts, Stanton Williams, the Mayor of Nantes Johanna Rolland, the Director of the Musée d'arts de Nantes Sophie Levy and consultants Max Fordham and Artelia will describe the concept as well as the content-related and artistic aspects of this new museum. Archival imagery and numerous illustrations complete this overview. 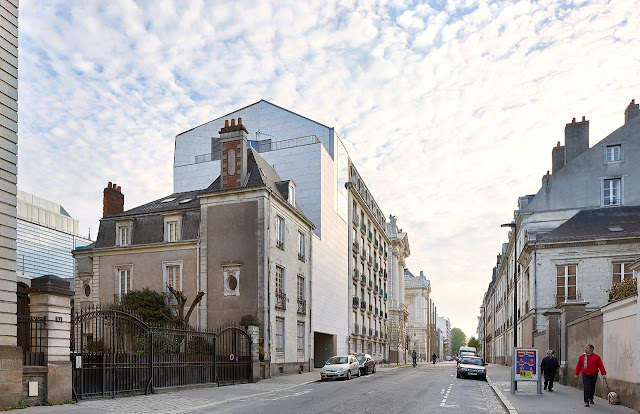 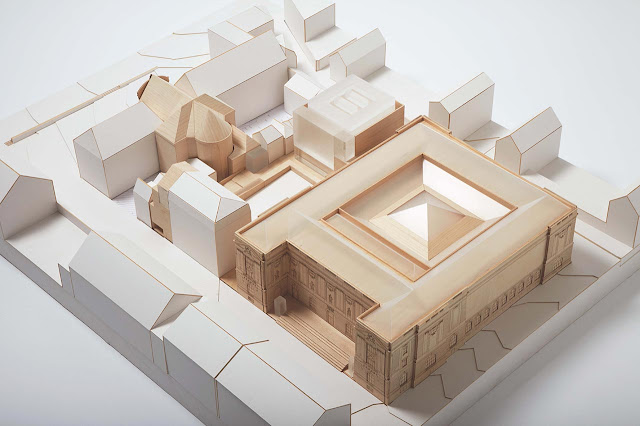 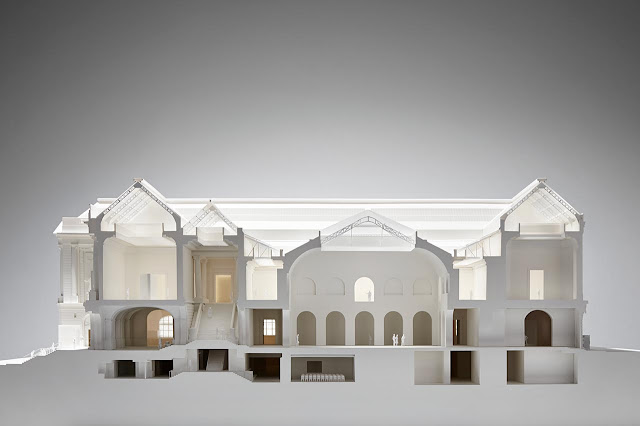 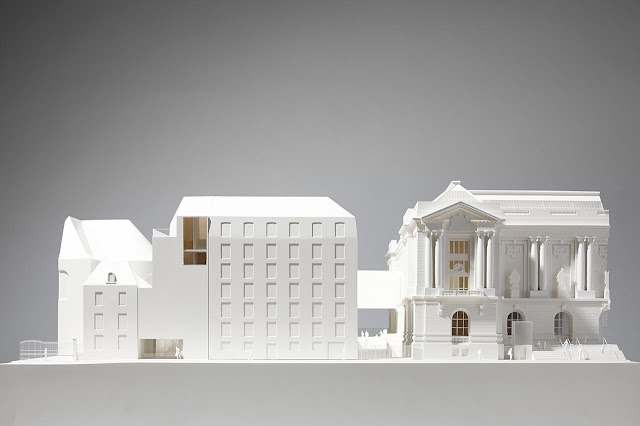 All images courtesy of Stanton Williams. Photography: Hufton+Crow, Stefano Graziani, Jack Hobhouse
Posted by Senay Gokcen at 2:52 AM No comments:


Bialsky has built some of the most exceptional homes seen on Long Island’s East End for some of the Hamptons’ most discerning clientele. He turned to AIA Institute Honor Award-winning architect Kikoski for a residence that celebrates the stunning natural landscape, storied beauty, and expansive ocean views that are the best of the Hamptons. 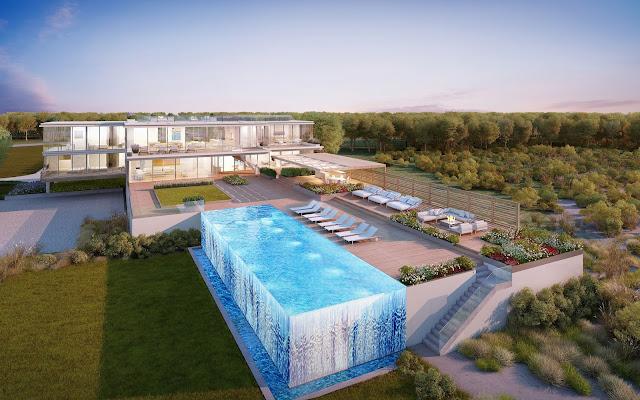 "We wanted to create harmony among house, land and sea, something that took advantage of this unique oceanfront positioning, a contemporary design where you can almost feel the sand beneath your feet from any spot in the house," said Kikoski. "We’ve worked on NYC trophy penthouses where it was all about the views, but this home really takes the cake." 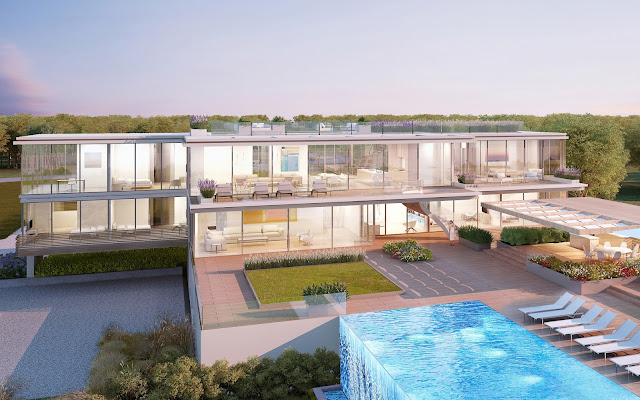 With an outstanding oceanfront location and deeded ocean access to a private section of Bridgehampton’s sought after beaches, this state-of-the-art home takes the indoor/outdoor living concept to the next level, with 10,000SF +/- of interior space complemented by over 12,000SF +/- of exterior space. The expansive exterior space features multiple outdoor living areas including a covered kitchen and dining area, rooftop deck with landscaping/garden, numerous outdoor lounges, custom infinity-edge pool, fire pit and outdoor shower. 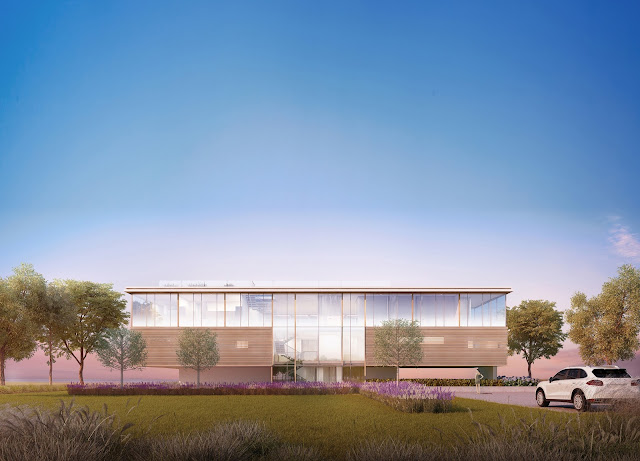 The combined 22,000 SF+/- of interior and exterior living space is afforded by the properties large and optimal building envelope being set in an AE Zone, which is rarely found in oceanfront properties. The superb location is captured by entire walls of glass that provide sweeping panoramic views of the Atlantic Ocean from nearly every room in the house, while sunset vistas over stunning Mecox Bay can be enjoyed from the rooftop deck. 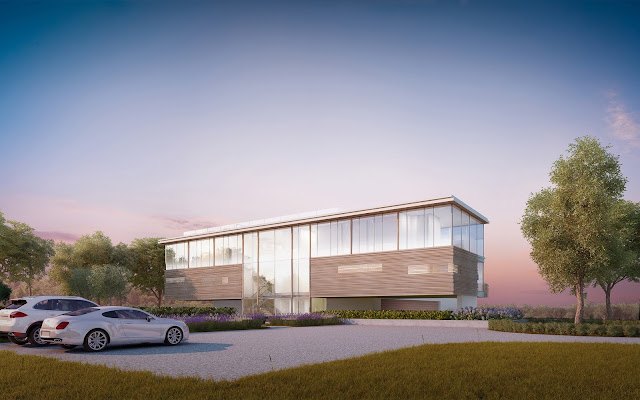 With a keen eye for any parcel's maximum potential, Bialsky is responsible for some of the most magnificent homes and developments on the East End, many of which have unparalleled views. Bialsky's exacting standards keep his homes in constant demand, "I don't buy any property or build any home I wouldn't want to live in myself," he says. 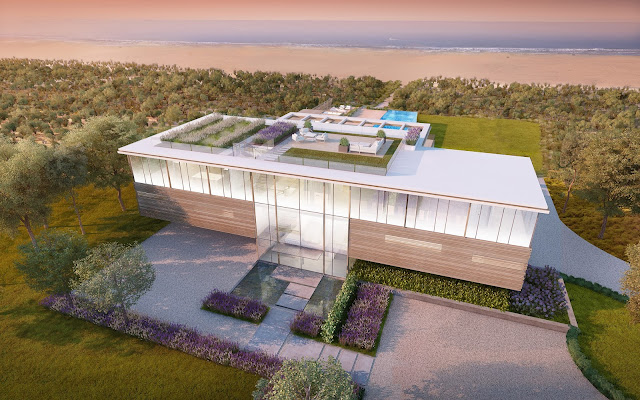 The property is listed for $44.9M with Zachary and Cody Vichinsky of Bespoke Real Estate. Bespoke is a Hamptons based firm that only represents $10M and above properties . Kikoski is currently working on 75 Kenmare, a 90,000 SF residential development which recently broke ground in Nolita, with DHA Capital and the Kravitz Design Group. He is also the interior architect on the 325,000 SF tower by the Related Companies slated to open this summer at Hudson Yards. And AKA launched a line of home accessories with Swarovski Crystal at Salone de Mobile in Milan, Italy last April.

ABOUT THE DESIGN
The design blends 10,000 square feet of interior living space over two levels with an equal area outside -- spread between three floors of invitingly landscaped decks and terraces. Interior and exterior lie side by side, gently joined together by 60-foot long expanses of automated structural sliding glass panels that disappear into exterior walls. The open-plan living and entertaining spaces, as well as the master suite, enjoy magnificent direct views of the Atlantic Ocean, Mecox Bay and the landscape beyond in every direction from the second level. A triple height glass atrium organizes vertical circulation within the house, filling the interior with the fabled natural light of the Hamptons at every moment of the day. A folded metal plate staircase connects this level to a spectacular rooftop entertaining garden. 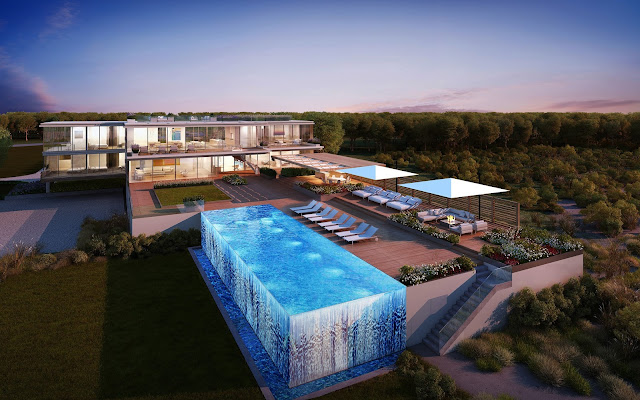 Equally bold is the focal point of the first level – an expansive outdoor deck, poised above the grassy dunes and offering direct ocean views from the trellised open-air dining pavilion, bar and kitchen, as well as a fire pit with seating area and multiple landscaped lounging areas. The spectacular oceanfront infinity edge pool and spa, unique in being just steps from the beach, is however the centerpiece and star. These dramatic exterior spaces flow into informal indoor entertaining rooms, including a generous family room and high tech home theatre which also feature automated structural sliding glass wall panels. Six additional bedrooms, a home office, wine cellar, sauna, and six car garage round out the program. The residence is set amidst one and a half expertly landscaped acres with ample manicured lawns designed by award-winning landscape architect Edmund Hollander.

In addition to elegantly composed glass facades, with playfully proportioned window patterns, the exterior of the house is clad in simple honest materials such as cerused stucco and a randomly staggered horizontal screen of three different sizes of Brazilian Ipe wood components. The screen is inspired by Kikoski’s prior collaboration with artist Liam Gillick for a site-specific installation, and complements the clean lines of the exterior with an inviting dappling of shade and shadow.

ABOUT AKA
Andre Kikoski, renowned for his work at the Guggenheim Museum, is an award-winning Manhattan-based architect, with more than 100 completed projects. His firm AKA has been featured in more than 700 publications across 27 countries, and has won over 30 design awards for interior design, architecture and product design. Andre is a Trustee of the Van Alen Institute and Alumni Council Emeritus at the Harvard University Graduate School of Design.
Posted by Senay Gokcen at 4:09 AM No comments: